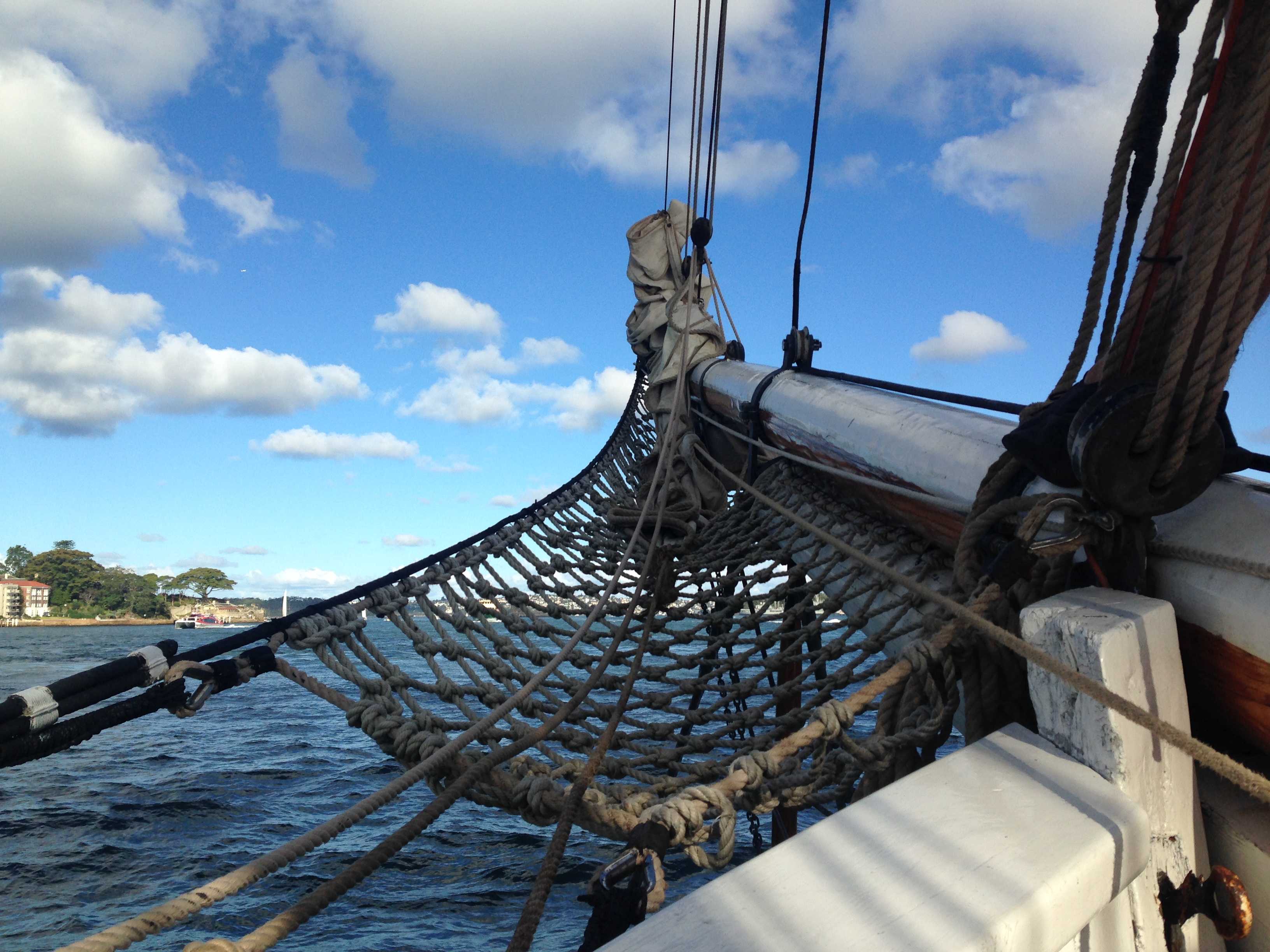 The bow of the Southern Swan in Sydney Harbor.

When we planned the trip, Tiffany and I focused on what we wanted to see and experience. The logistics of how we would get there was often just a means to an end. Five weeks into the trip, however, we’ve come to realize that “getting there” is a powerful part of the experience. Here are the diverse transportation methods that we’ve utilized to date. And yes, we did ride camels.

Jet Planes – We’ve taken six flights so far. The commercial jet is essential to covering the globe in a short amount of time. Modern air travel truly is a miracle. 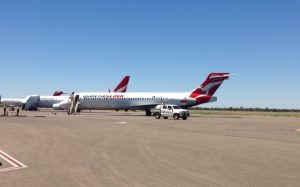 Above: Heat rising off of the tarmac in Alice Springs, Australia, blurs the image. Climbing stairs from the tarmac to board the plane is the norm in smaller airports.

Automobiles – Having a car in New Zealand enabled us to get off the tourist track and gave us freedom to experience the country on our schedule. Adjusting to driving on the left side of the road, however, took some time. Fortunately, we only had one near miss. (Freeway entrances can be confusing!) 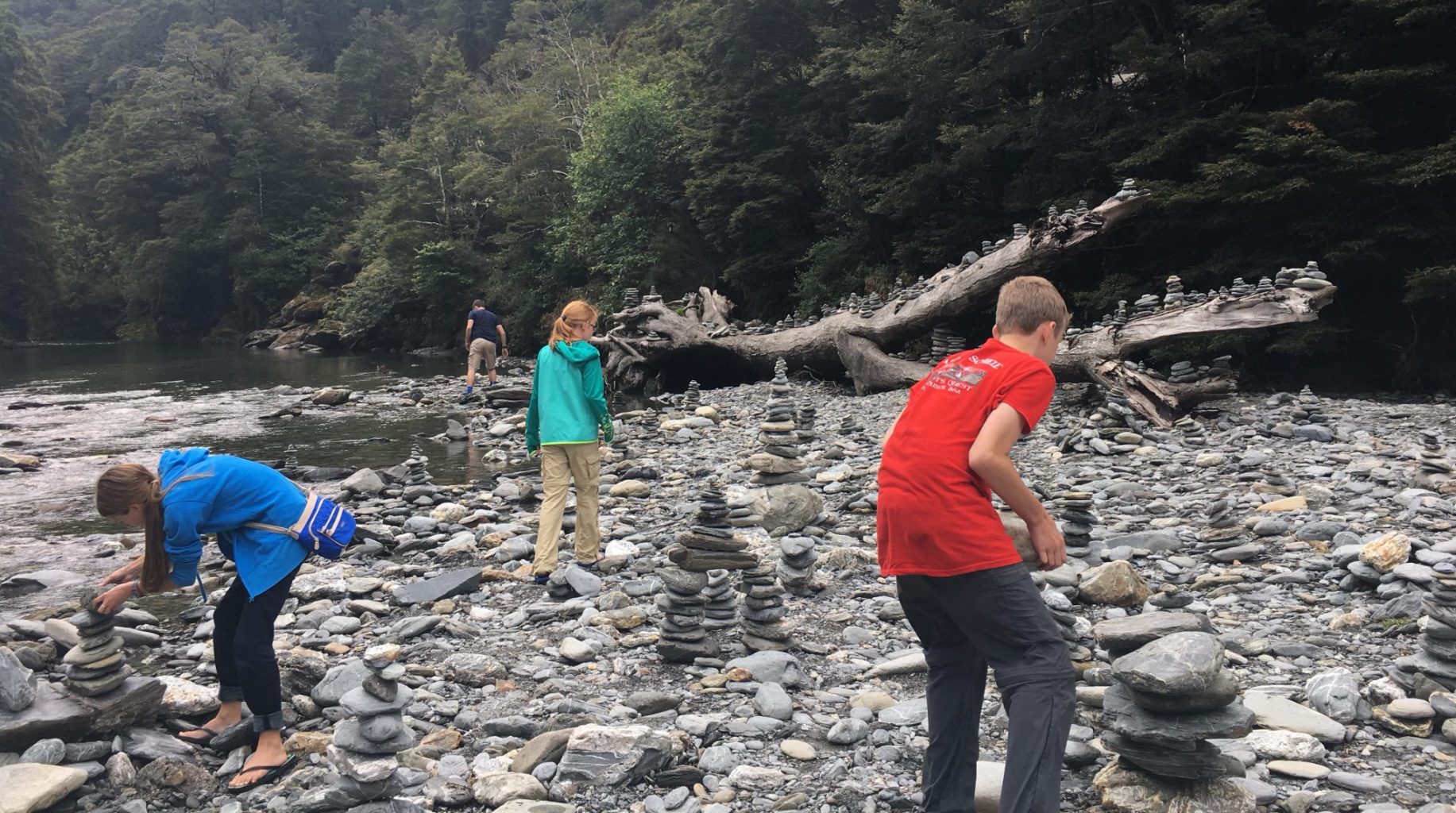 Above: In route from Franz Josef to Queenstown, we pulled off the road at Fantail Falls. There we discovered hundreds of cairns (human-made rock piles) in the river bed. We added our own.

Ferries – From old chug boats that took us across the Bay of Islands in New Zealand, to high-speed catamaran passenger ferries in Sydney Harbor, we have experienced a variety of ferries. 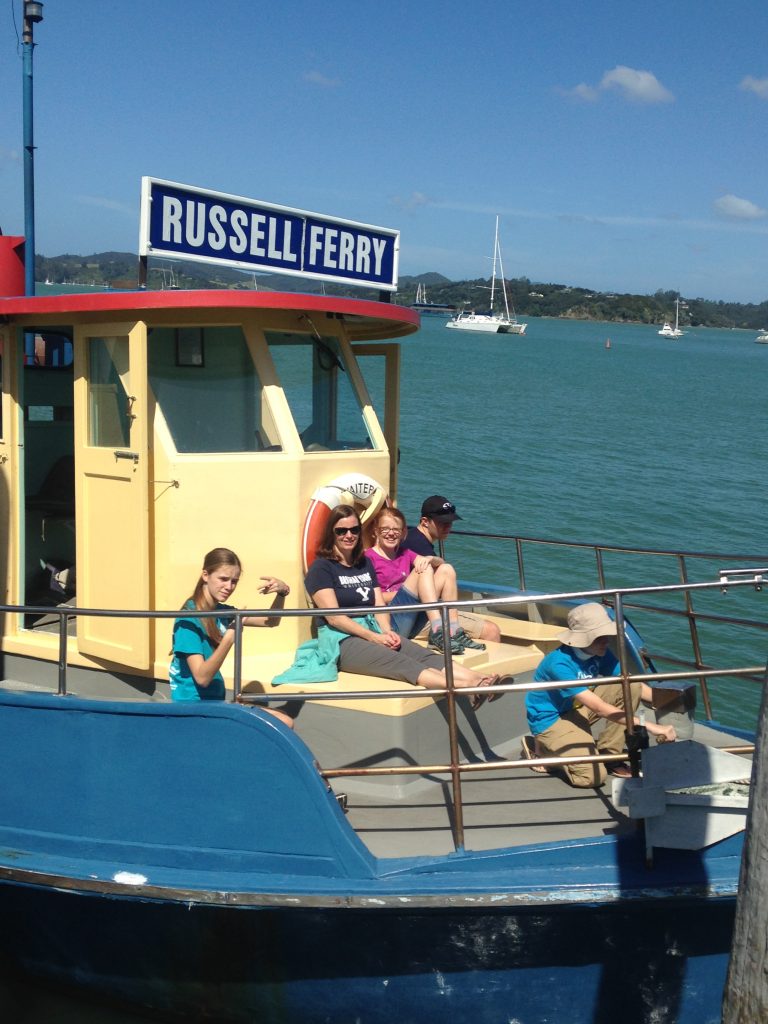 Above: Tiffany and children on board the ferry to Russell in Paihia, New Zealand.

Trains – We made our way from Christchurch to Greymouth, New Zealand, on what may be the most picturesque railway in the world — KiwiRail’s TranzAlpine. In the coming months, we will be on more trains in Japan and Europe. 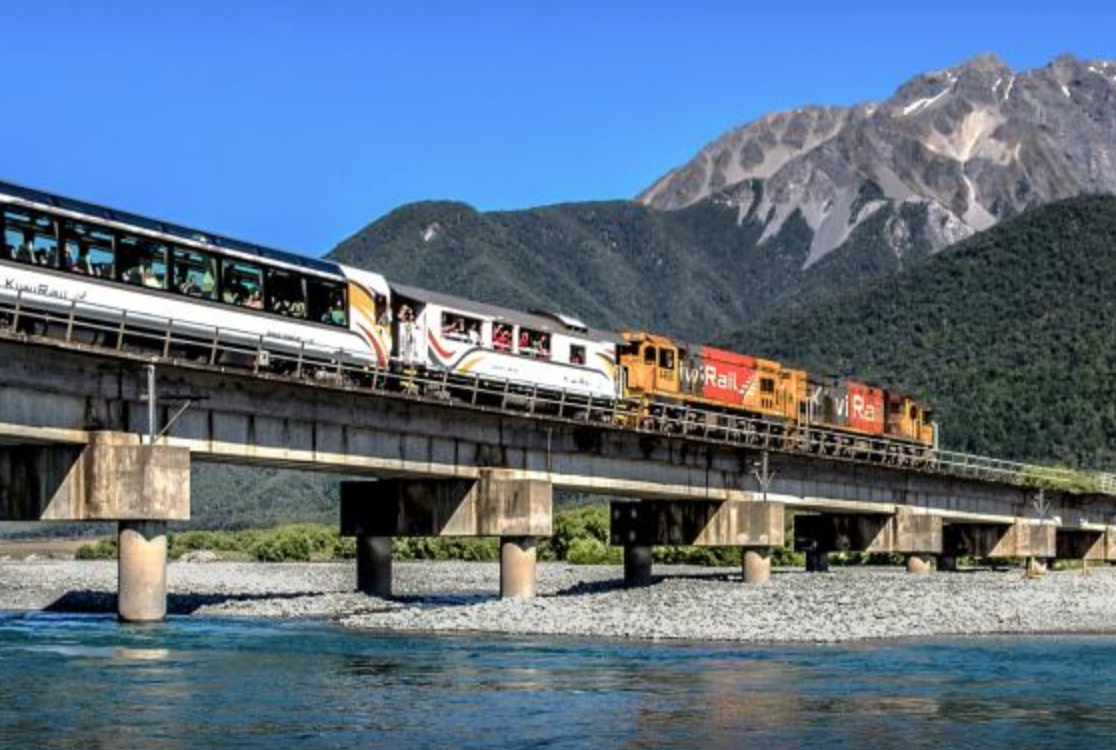 Above: The TranzAlpine train includes open-window viewing cars. As in this stock photograph, ours was between the passenger car and the engine.

Helicopter – It would be nearly impossible to alight on top of a glacier without a helicopter. Our experience at Franz Josef Glacier was exciting and breathtaking. 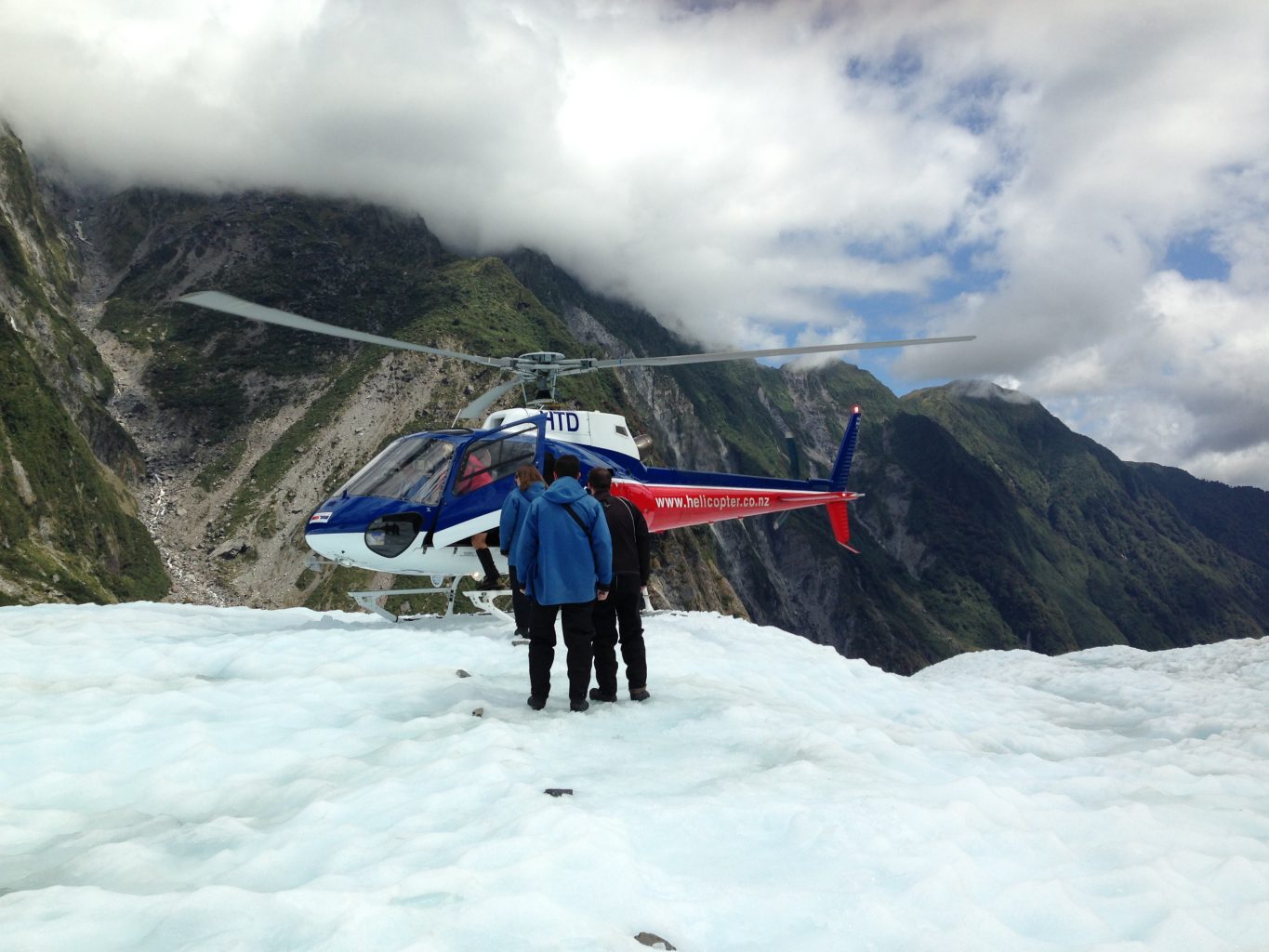 Above: Waiting to board the helicopter on Franz Josef Glacier, New Zealand, for our return flight.

Prop Planes – We flew from Queenstown to Milford Sound, New Zealand, in a small prop (propeller) plane. Skimming the jagged and snowy tops of the Southern Alps gives one a true appreciation for their rugged and lofty beauty. 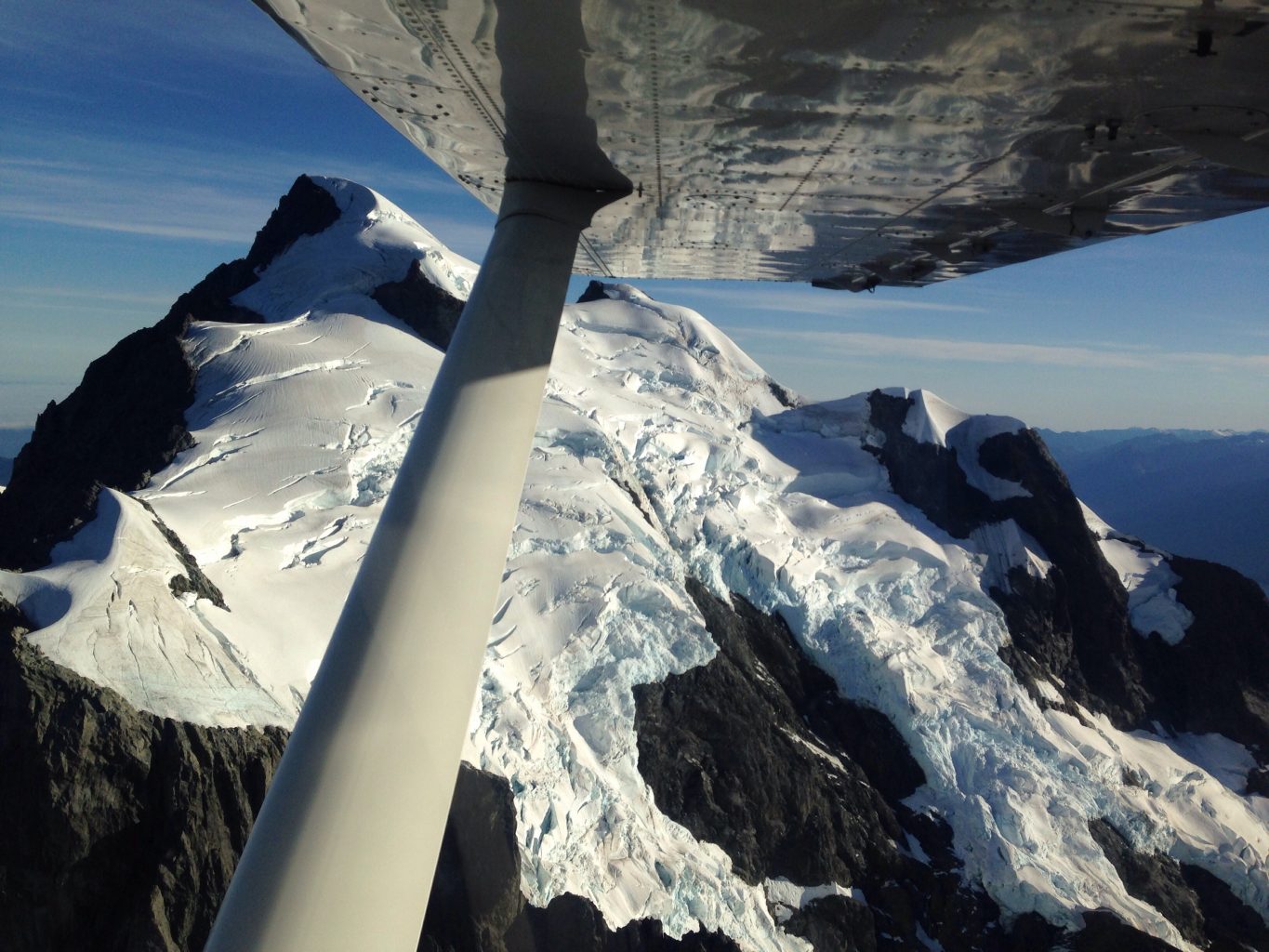 Above: A view of a glacier out the window of the plane in route to Milford Sound, New Zealand.

Bicycles – We chose bicycles to circumnavigate Ulura, a impressive rock formation that is sacred to the Aboriginal people in the Australian outback. We started early in the morning since the temperatures climbed to nearly 100° F before we finished the 15km track. In New Zealand, Ella and I also rented mountain bikes to explore trails around Queenstown. 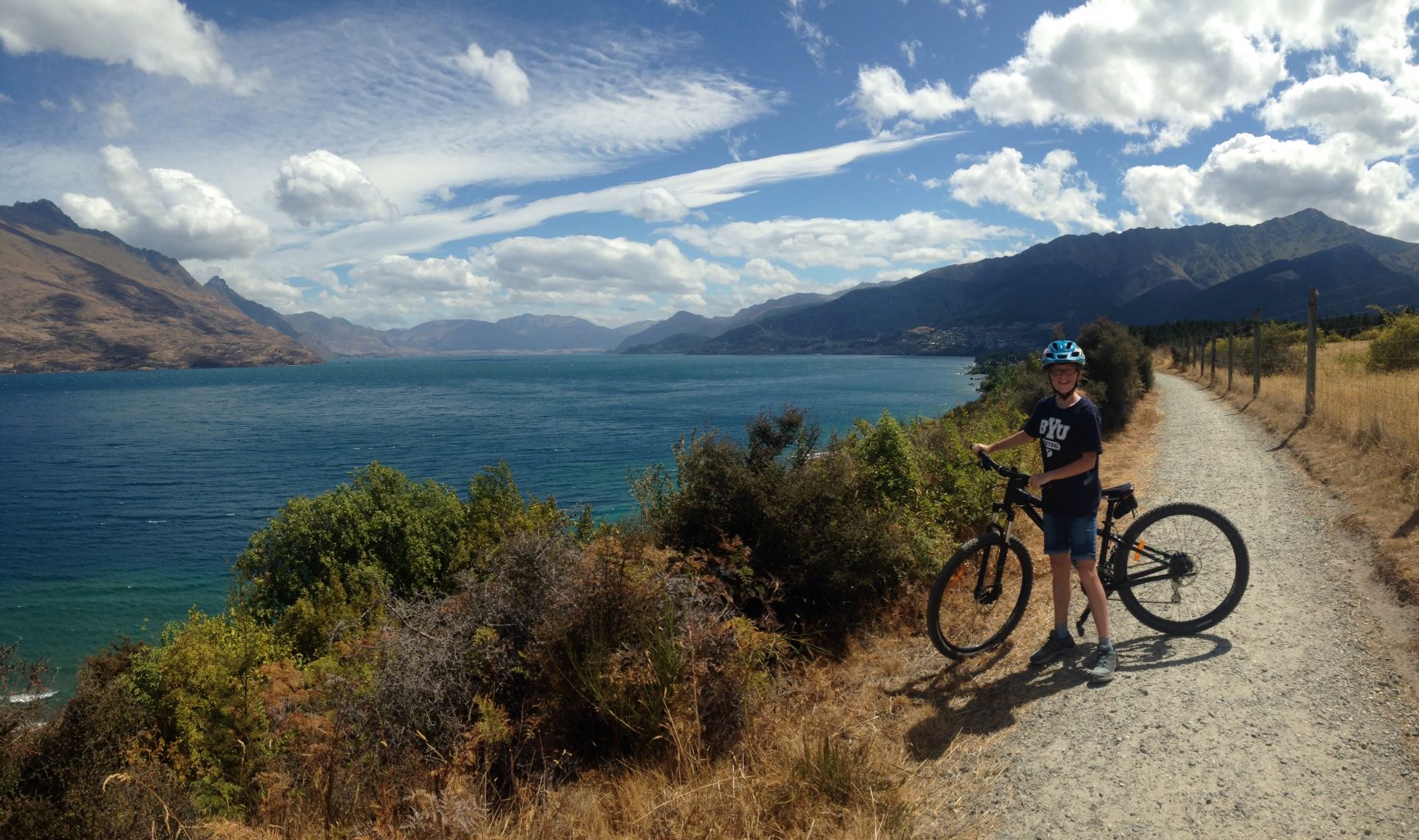 Above: Ella on the trail to Jack’s Point in Queenstown, New Zealand.

Ski Boat – Lake Wakatipu in Queenstown, New Zealand, is a gorgeous lake whose clear, deep blue waters beckon one to come for a swim on a hot summer day. We “hired” (aka rented) a ski boat for half a day to waterski and explore the lake. The locals say that the water is so clean in the middle of the lake that you can drink directly from it. While we didn’t do that, we did enjoy a swim in its cold waters. 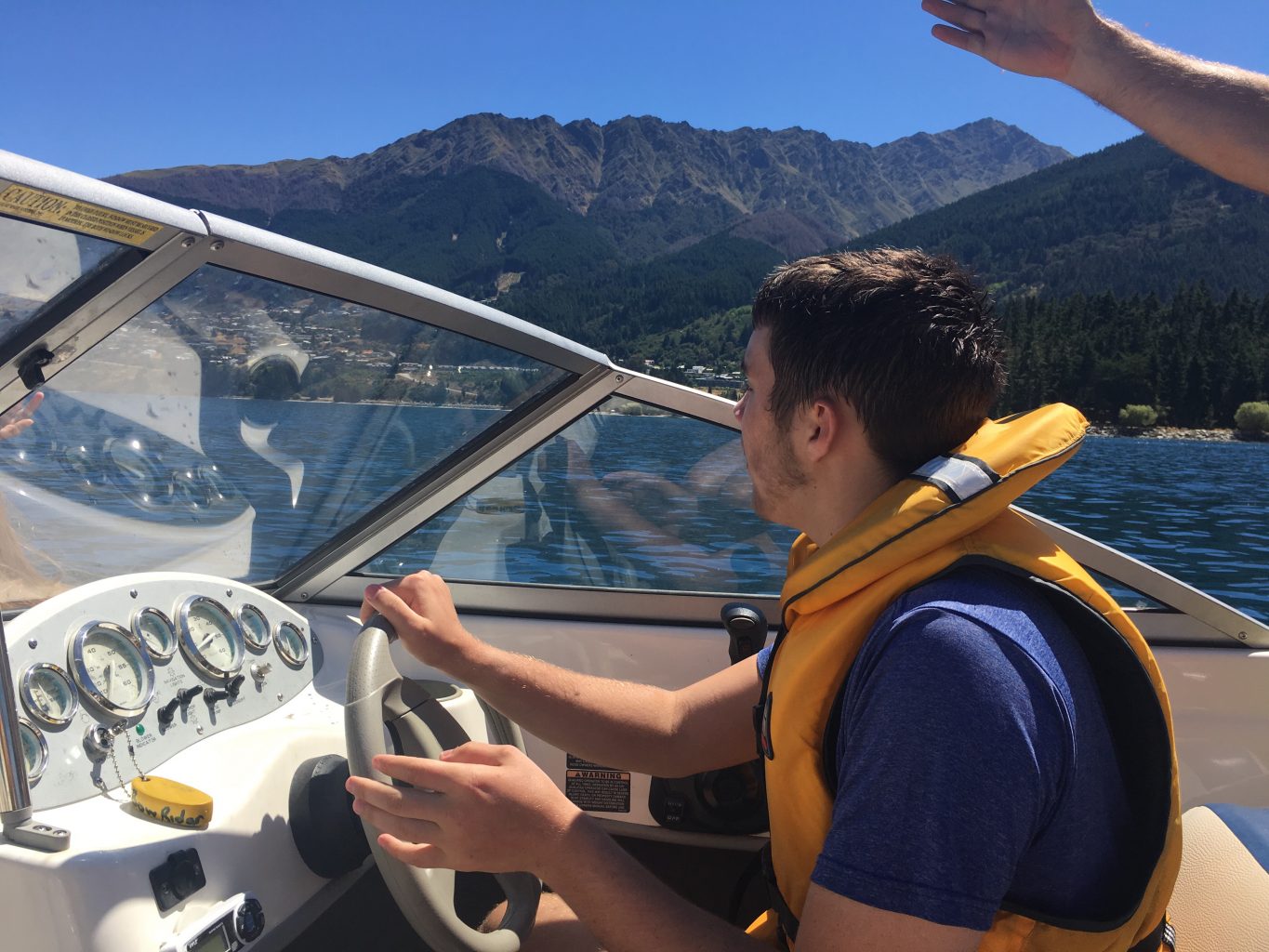 Walking – I call out this method of transportation because there have been places on our trip where we simply planned to walk everywhere. To date, we’ve covered many kilometers in both urban and rural settings. 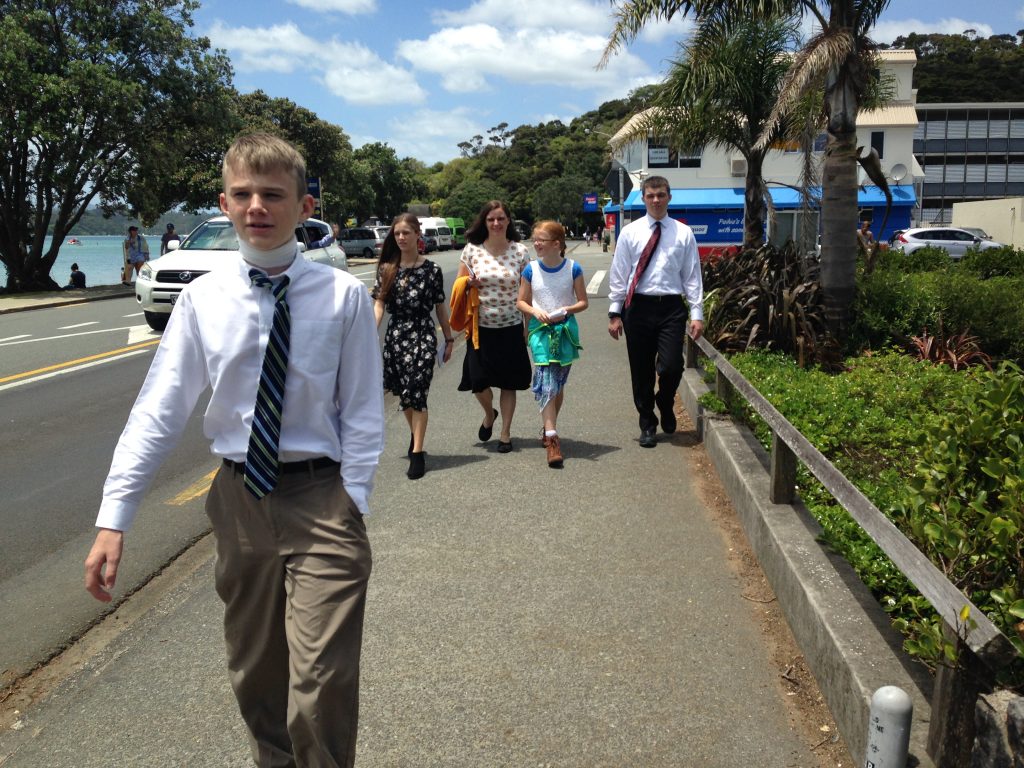 Gondola – In Queenstown, we scheduled a zip line experience high on the mountainside overlooking the town. We rode what we were told is the steepest gondola (70+ degree grade) in the Southern Hemisphere. It felt that way on the ride up. 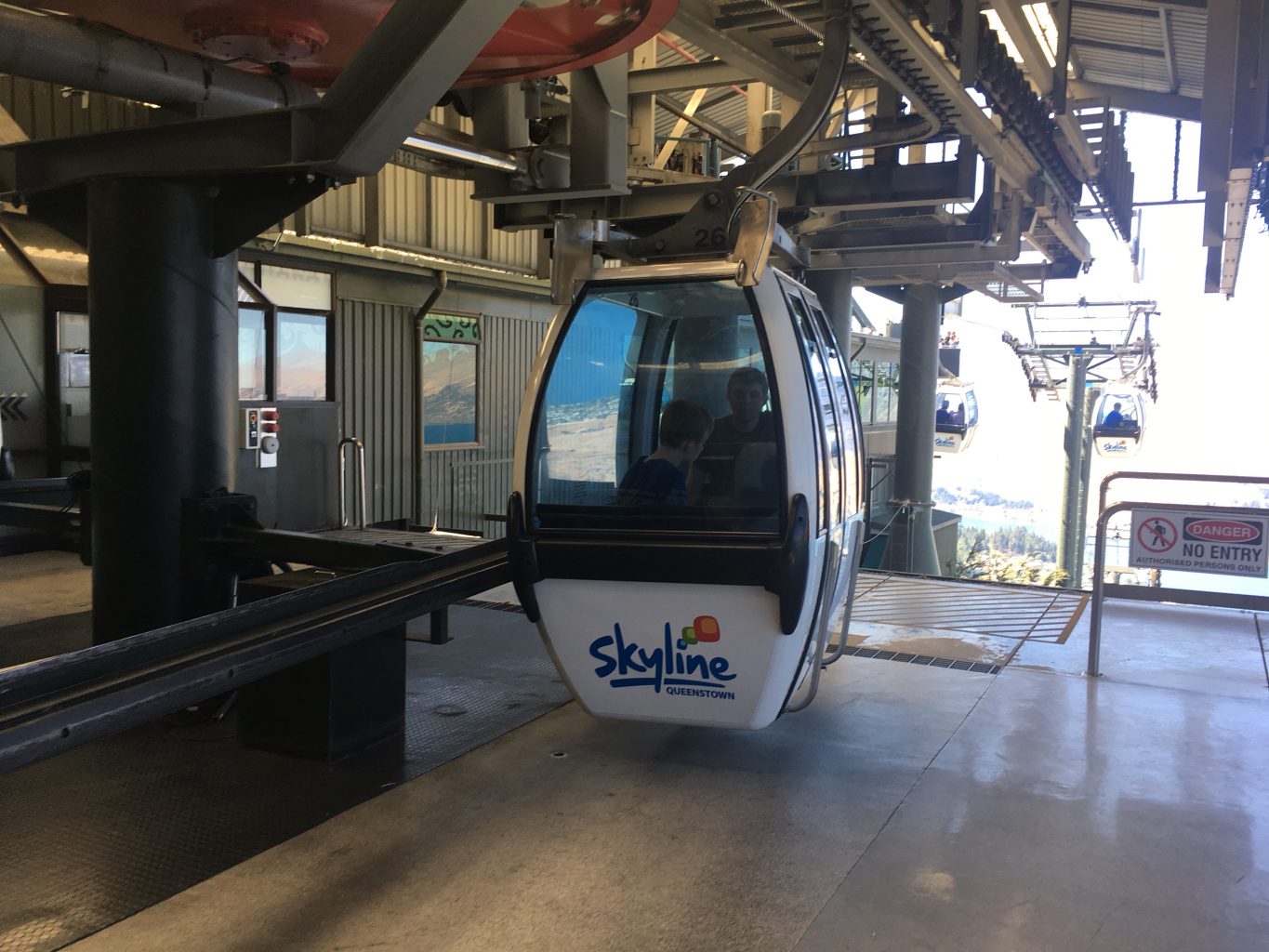 Above: Parker and Carter in the Skyline gondola in Queenstown, New Zealand.

Jet Boat – Jet boat technology was perfected in New Zealand in the 1950s and was put to work on the Shotover River near Queenstown. Today, jet boats are no longer used for transporting people from point to point. But modern jet boats are used to give adventurers an exhilarating, white-knuckle ride through the Shotover River Canyon. (Check out Ella’s post and video about our ride.) 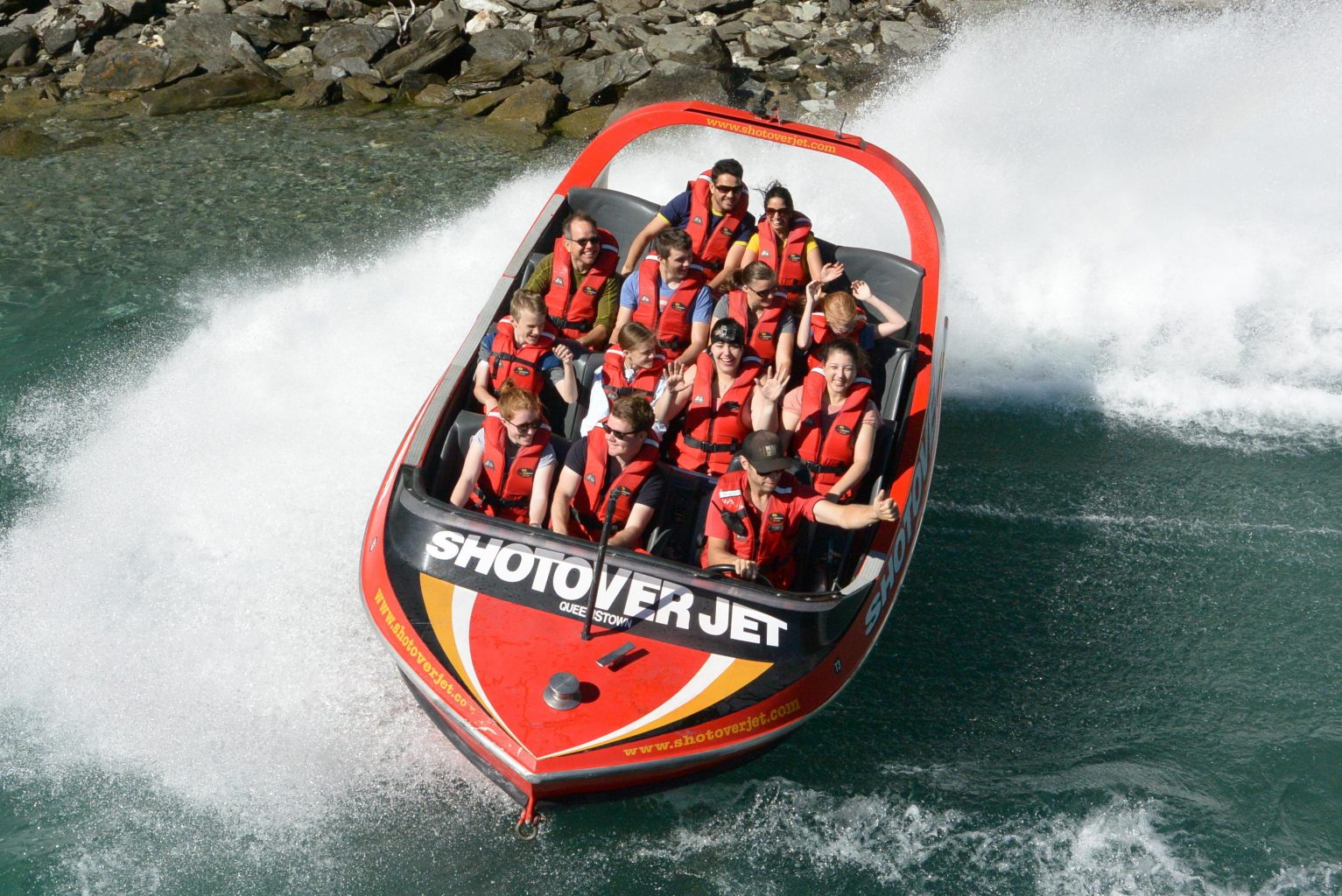 Above: Craze family in the second and third rows of the jet boat during one of its 360 degree spins.

Cable and Rail Cars – To the west of Sydney is the Blue Mountains. The Australian park service has built two cable car systems that give tourists unmatched views of the mountains, waterfalls, and canyons. The park service also converted a very steep set of rails, previously used for hauling coal up from the now historic coal mine, into a scenic railway for those who don’t want to hike back up the canyon. 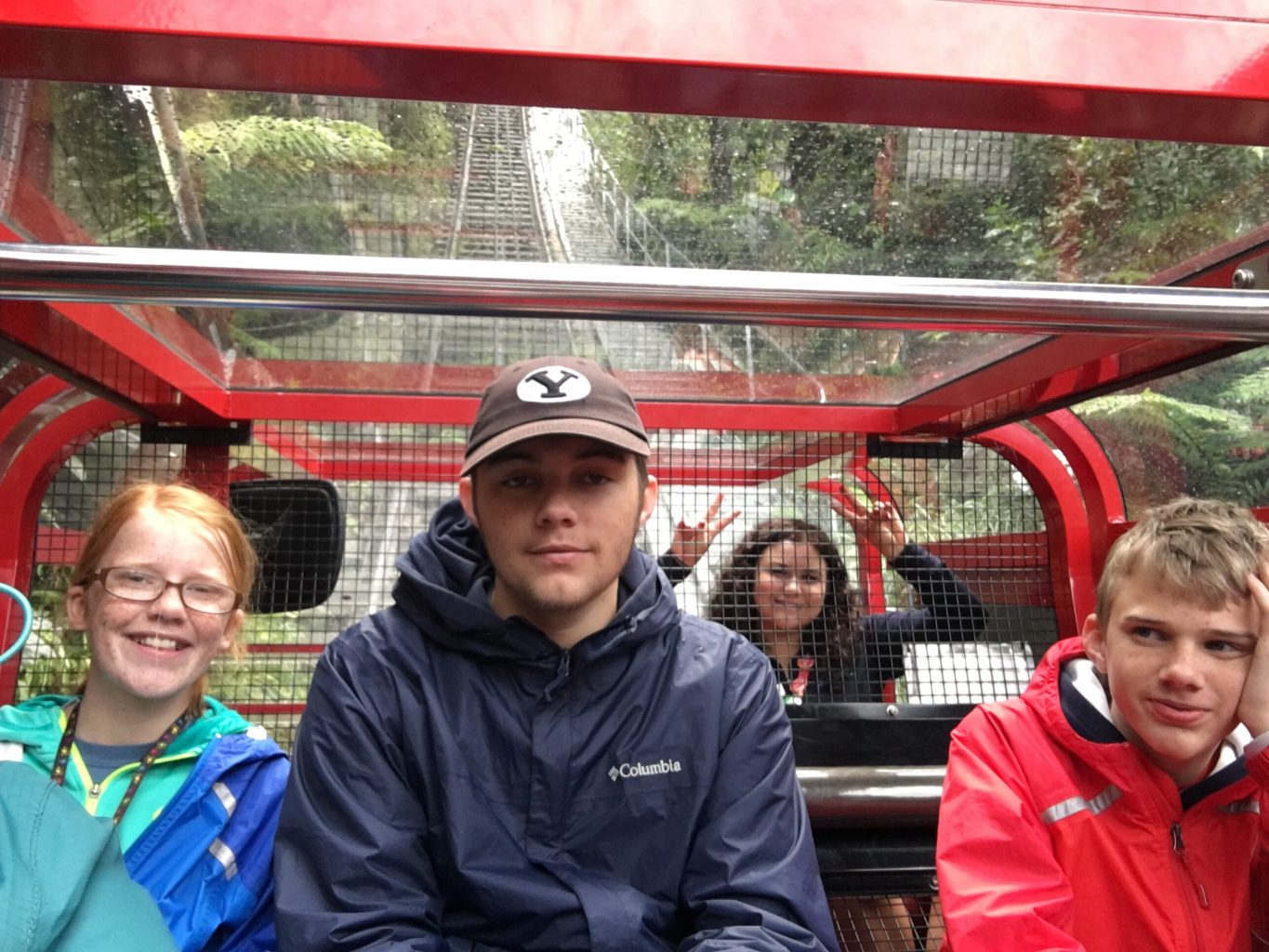 Above: Ella, Carter and Parker (with train operator / photo bomber) on the Blue Mountains Australia Scenic Railway immediately before our ascent.

Sailing Ship – While in Sydney, Australia, we took the opportunity to experience its beautiful, busy harbor from abroad a tall sailing ship. Although built in the 1920s, the ship’s design dates from the mid-1800s. The crew let us climb the masts (with safety harnesses) while under sail, which gave us a birds-eye view of the Sydney Opera House. 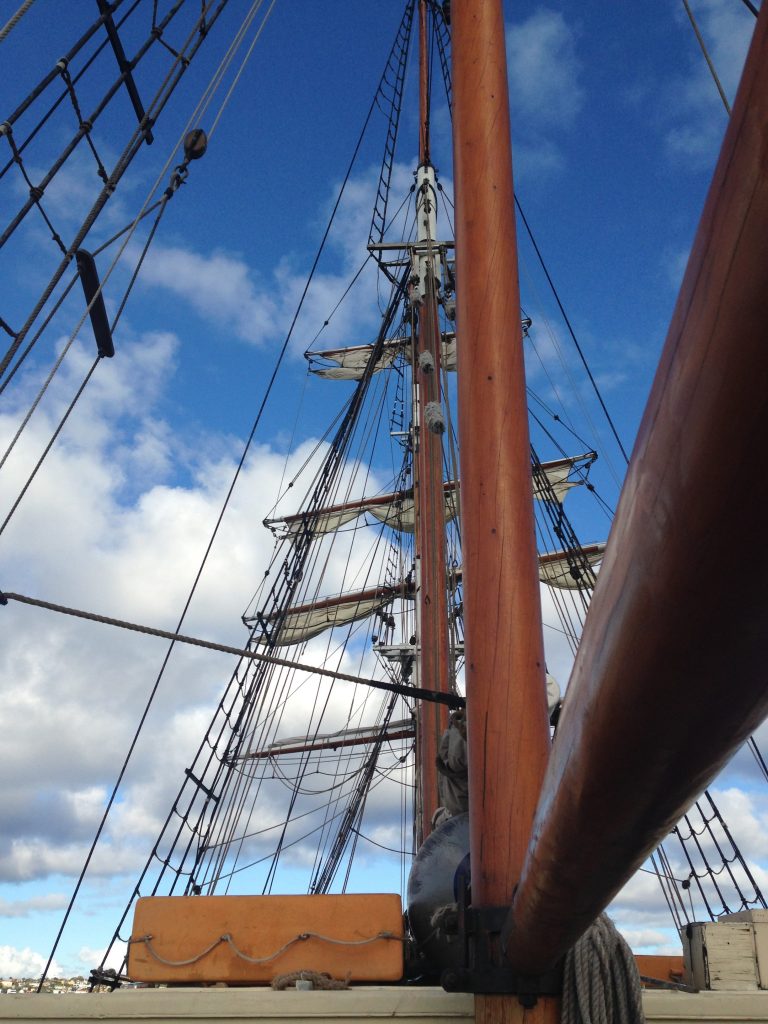 Above: The masts and rigging of the Southern Swan in Sydney Harbor.

Buses – The Australian outback is big. Real big. We got a sense of its size and beauty on a 5+ hour bus ride from Ayers Rock to Alice Springs, which are near the center of the continent. 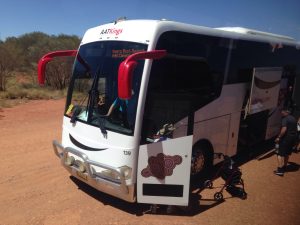 Above: Our “bus stop” in the middle of the Australian outback was a dirt field off the two-lane highway where three buses meet daily at 2:40pm. The AAT Kings’ buses are nice rides.

Camels – We rode camels to our Field of Light experience at Uluru in Australia. Camels are fascinating creatures. Today, Australia is home to more than 500,000 feral camels. They were originally brought to Australia from Afghanistan in the 1800s to help explore and cross the vast interior. We saw wild camels during our bus ride across the outback. 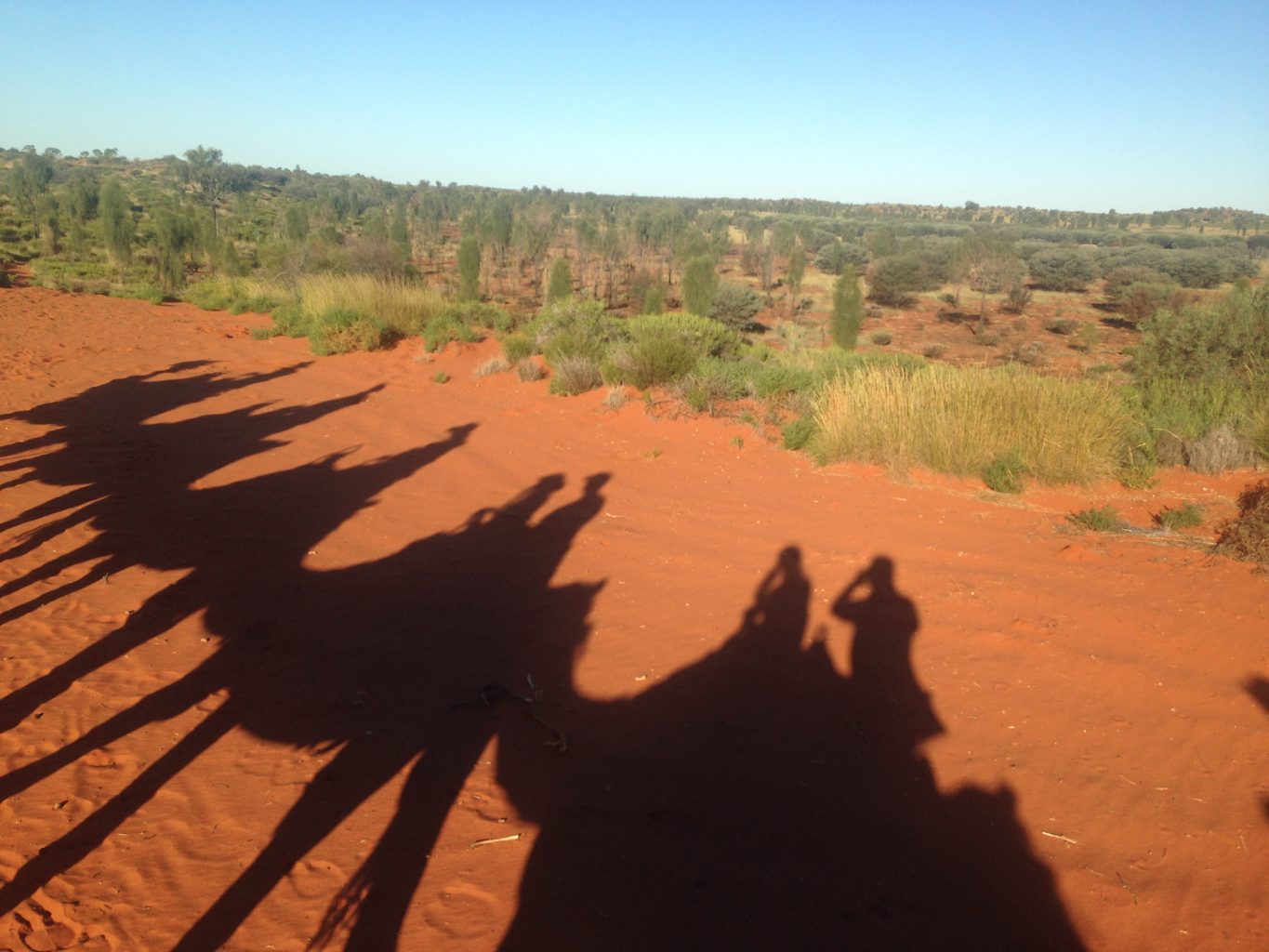 Above: Shadow of our camel caravan as we walked toward Uluru in the Australian outback.